On the second day I moved to Manhattan, someone yelled “Jesus Christ!” behind me just because I stopped suddenly on the street. I thought, “What in the world?! How would you get so angry with such a minor incident?”. After living in New York City for the past six months, I kind of get this man now.

I broke the first and the most important rule on the streets of Manhattan; DON’T STOP!

Don’t stop no matter what happens in the middle of the street of Manhattan. Stick to your lane, step on it, keep your speed, and don’t yield. That’s how you walk here. It sounds like driving because walking on the streets of New York City needs traffic rules. After mastering the art of speed-walking in the city, I have become one of those New York moms who would push through the swarm of tourists with our stroller. Because, I’m sorry but, that’s how it works here. Right, moms?? 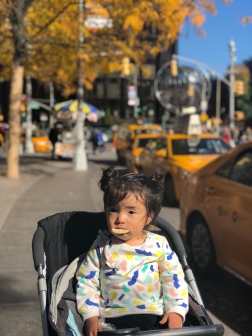 It has been half a year since I moved to New York City. Unlike my audacious 2-year-old, who had absolutely no issue transitioning herself from a nice and quiet life in Capitol Hill, Washington D.C., I had some ups and downs during this big move.  Despite the fact that I always loved NYC as a visitor, I never imagined it would be an ideal environment for a mom and a toddler like ourselves. I had stereotype images just like everyone else that has never lived in NYC has; dirty, smelly, expensive, rude, too cold, too hot… you name it.

Here are my biggest three fears I had about NYC living and how they turned out to be true, or happily false. 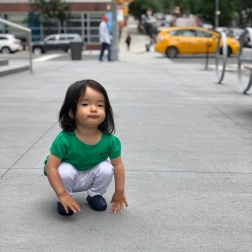 Fear No. 1: “New York is too expensive. How am I supposed to have fun with my kid?”

True & False– I’m used to living in big cities, and I understand that you need to pay a bit of a premium when you’re taking advantage of everything that a city can offer. With that being said, I still find New York City ridiculously expensive. This is by far the most expensive city I’ve ever lived in. Everything is so expensive. Especially, when it comes to the restaurants and groceries. After many failed trial shopping trips at overpriced local markets & delis, I started to feel like even the Whole Foods Market is reasonably priced, and three bananas for $1 at a street fruit vendor makes me feel like I was just teleported to a different country.

The other day, I bought a muffin and a sandwich from this mediocre bakery in our neighborhood. When the cashier said $17, I couldn’t believe my ears at first. And two seconds later, I remembered I was in Manhattan and was sincerely relieved that I didn’t add a drink with my order. I do miss Tokyo, where a quality, healthy lunch set would be just around $10 (plus a better service without tips). I even miss Washington D.C. with a full range of world-class museums that are all free entrance. Having to pay $14 for my 2-year-old to wander around at CMOM  was kind of a culture shock for me at first. 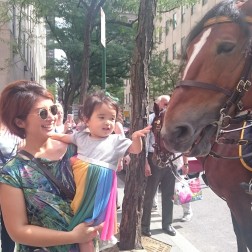 But, there are some ways to enjoy the city with kids without paying a fortune. When I used to visit Central Park as a tourist, it was for Strawberry Fields and the Sheep Meadow. But CP, as we call it, actually offers so much more than those touristy spots! It is full of amazing well-constructed playgrounds, beautiful forest-like areas such as Hallet Nature Sanctuary and the Ramble (you can even enjoy bird-watching!) and guess what, there is even a zoo with a pair of snow leopards. We also enjoy activities such as Free Forest School and Swedish Cottage Marionette Theater. Running through CP with our jogging stroller has been such an exciting experience as well. 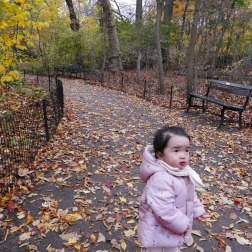 Even outside of CP, there are playgrounds every five blocks around where we live in Upper West Side. They are usually nicely maintained, and during the summer their splash pads are all kiddo’s paradise. There are three public libraries accessible within walking distance from our place and they all have lovely free story times and an extensive collection of multilingual books. I even get to take my toddler to story times in Korean & Japanese! There are also free concerts at Lincoln Center, and all the museums and zoos have free-entrance days.

I also use the services like Kidpass, Culture Pass and ID NYC, and I can say with confidence that my 2-year-old and I are exposed to so much more culture than ever before. Our favorite go-to spots are usually museums, especially the Discovery Room at Natural History Museum and Art Lab at MOMA. And the WeBop kids jazz class and story hour with Drag Queens are probably the most New York-flavored activities we’ve done so far. 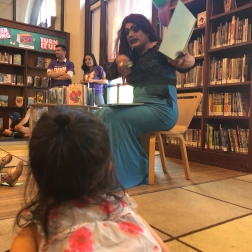 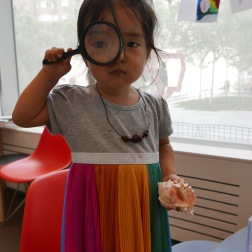 False – I used to be very intimidated by New Yorkers. I thought they were rude and mean. But now I know that they are not mean, but they are very busy people. (Or I just tell myself that to lessen my stress every day.) They walk and talk fast and that’s just how it is. You don’t smile at each other on the streets because you pass by millions of people each minute. I used to be so shocked when people don’t thank me when I hold doors for them. Nothing really shocks me now. When I hear “Thank you” and “Excuse me” from people on the streets here, I immediately assume that they are tourists and they remind me of what etiquette used to mean to me. Also, I have never seen so many middle fingers on the streets in my life. If you live here, you would often encounter this scene; where a car (which had the light) honked at a jay-walker gets the middle finger instead of an apology. How could people be so angry all the time? It is almost as if “grumpy” is the standard state of mind of New Yorkers. So much for “New York state of mind”… Can we just let it slide, please?

But when it comes to little kids, even those New Yorkers can be sweet! We always encounter people who would smile and say hello to my toddler on the street. When she’s crying, there would always be someone who would try to console her. There’s usually someone nice to help carry my stroller up the staircase at subway stations. This is really not the norm in my hometown, Tokyo, which is another metropolis just like NYC. 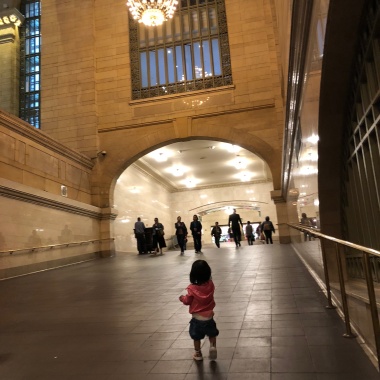 Also, making “mom friends” has been very easy here in New York City. I’ve met many moms here for the past six months and I can call them my friends. My toddler and I have been very happy hanging out with our diverse group of people here in NYC. Not only we’ve met so many Japanese and Korean moms, who were so hard to find back in Washington D.C.,  we also hang out with Spanish-speaking friends often enough that “gracias”, “despasito” and “cuidado” are a part of my already-trilingual (Japanese, Korean & English) toddler’s vocabulary! I’m so happy that we live in such a diverse, international, welcoming city. 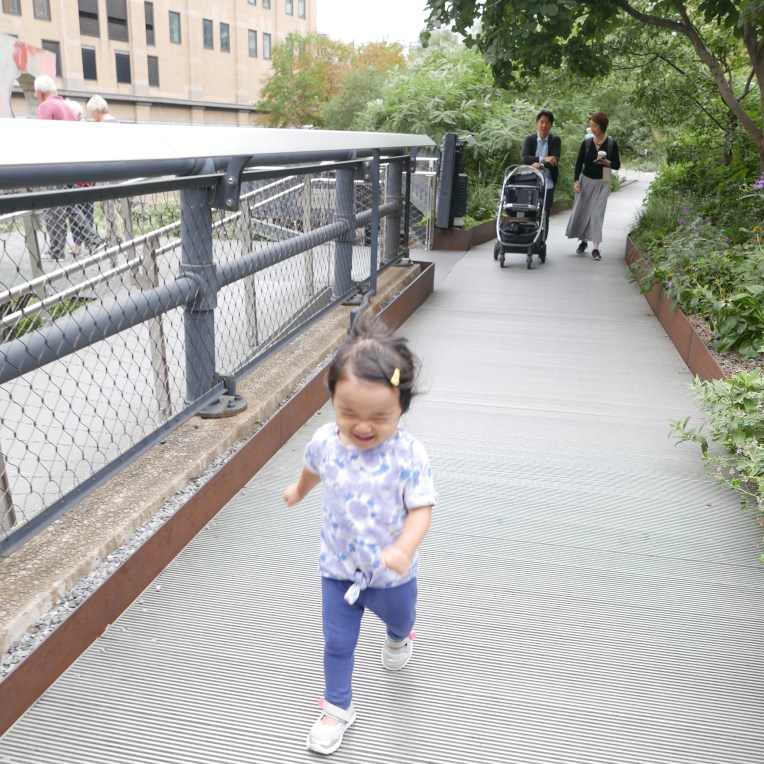 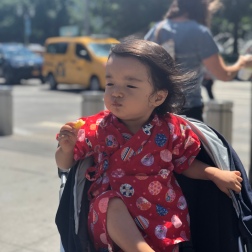 Snacking on her stroller in NYC

Sleeping thru the city noise

True – Sadly, this is true. Most of the time. It was especially bad during the summer; I felt like everywhere I went smelled like dog poop. Usually, I am a very germ-friendly mom. I used to let my little one touch everything on the street from those beautiful flowers on the sidewalks to rusty fire hydrants on the building walls thinking that it’s good for her immunity-building. Wrong!! In New York City, just about everything has a pretty high potential to be covered with dog pee. There are more dog accessories shops than kids clothing stores here in Upper West Side, which means there are so many kinds of dog owners. Some are good, and some are not. Although I love how my little one gets a lot of fun interaction time with these beautiful NYC dogs, I’m not so happy about how she picked up a piece of dog poop in Riverside Park and started playing with it thinking that it was a piece of play-doh…

Subway could be comfy

“Where are we going? Downtown?”

And there’s the subway. New York City Subway stations are unbelievably dirty. I know I should not compare it with “our” train/subway system in Tokyo, but it is just way too outdated and I don’t even know how they could get so filthy. Yes, there is something very special about it like the retro, historical tile works and all the cool local street performers, but it is definitely difficult maneuvering with a toddler who wants to touch and sit on everything. Holding my breath every time I go into the elevator (if I’m lucky enough to find a working one) has become my norm. And the air pollution in the city is just unavoidable. I can tell for sure because of how black my toddler’s boogers could be at times…

As for the loudness of the city, I am not so bothered by the beautifully-orchestrated street music of Manhattan streets (which are also called sirens, honks and yelling) any more. My toddler was sleeping through them from day 1 in her stroller. I somehow learned to shut them down, too, although I still sometimes wonder “did you really have to honk there?”. New York also has another type of noise which I call a visual noise. This is due to the fact that there are just so many, sooo many different types of people on the streets of New York… I used to actually look at the people that I passed by on the streets, but I don’t anymore because it is just way too much stimulation for my eyes. 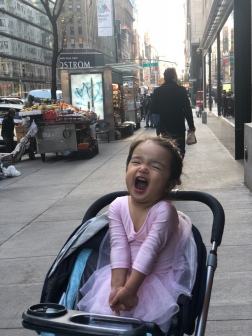 All in all, I have come to resonate with the over-used phrase, “I love New York”. As corny as it sounds, I know that the phrase could carry a special meaning to every New Yorker and now I have my reasons. Hopefully, our little “Uptown Girl” would also always remember all the fun times she’s been having all over the city. Just watch out for dog poops!